Training your puppy should begin as soon as you bring him home. However, you need to have reasonable expectations.

Crate training is considered the best way to train a young puppy. Buy a crate that is big enough for him to turn around in and leaves some room for the puppy to grow. 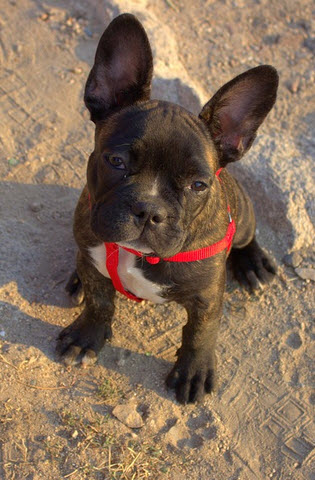 You should place the puppy’s food and water dish in his crate. This makes him associate his crate with good things so he won’t think of his crate as punishment. It’s best if the water dish attaches to the side of the crate so it can’t spill. Water should be changed often.

Blankets should also be placed in the crate. At first you’ll need to close the door to keep your puppy in his crate but eventually you’ll be able to leave the door open and he’ll retreat to his crate as his safe place.

After eating immediately carry your puppy outside. Take him to the same place so he’ll learn this is where he eliminates. The smell will help him learn that this is the right place.

Reward him with praise and a treat when he defecates in the right area.

Then let him play for a little while. Do not play with him before he does his business. Make him understand that playing his part of his reward for doing what he’s suppose to do outside.

Use the same commands for each task.

When you take your puppy outside say “Go” in a firm voice. This lets him know it’s time to urinate or have a bowel movement.

When your puppy chews on something he shouldn’t or starts to urinate inside the house say, “No” in a firm, not yelling, voice. Yelling will only scare him and he won’t necessarily realize what he was doing wrong.

A young puppy needs to be let outside often. If possible, plan to bring your new puppy home when you are on vacation or when an older child is out of school for the summer.

If it’s not possible to be home during the day then consider paying a dog walker or a neighbor to come over and let the dog out during the day. Your puppy should not be left in his crate for more than three or four hours at a time. All day is too long.

When you let your puppy out of his crate limit the area he has access to by using gates. A puppy that can roam all over the house will find plenty of ways to cause trouble. A kitchen or laundry room that has tile floor is a good option.

Puppy’s love to chew so give him safe toys to chew on. Keep him away from electrical cords.

Start training your puppy to wear a collar and leash right away. Walk with him in the house with the leash before taking him outside. When he walks with you properly give him a treat. He should think of “leash time” as a fun time.

Never hit your puppy. Train him by using rewards for good behavior and a stern voice for bad behavior.

Do not give treats randomly. Your puppy should associate his good behavior with receiving a treat. He will want to please you and get his treat so he’ll mimic the behavior that causes this result.